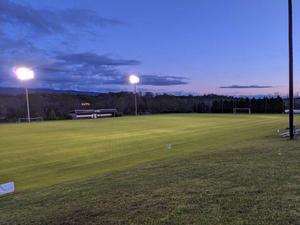 The Chuckey-Doak Middle School Lady Black Knights got their 4th straight win of the season Thursday evening after a week-long break. The Knights scored in the opening minute when Layla Fox took the ball off a defender and placed the ball in the back of the net for the 1-0 lead. The Church Hill Lady Panthers knotted the score 1-1 seven minutes later. In the 16th minute, Fox won the ball in the midfield area and played a through ball to Lindsey Rojas who finished the play by burying the ball into the bottom corner for the halftime score of 2-1.

In the second half, the Lady Black Knights came out on fire scoring 3 goals in the span of only 6 minutes. The first of which came in the 31st minute when Fox played a through ball to Tavyn Southerland who blasted a shot into the goal just inside the 18-yard box. Three minutes later, Southerland would find her second goal of the night when she won a loose ball in the midfield area and carried the ball into the 18-yard box before smashing the ball into the back post for the 4-1 lead. Finishing off the 3-goal blitz was Fox with her second goal of the night dribbling past defenders and placing the ball into the back of the net for the 5-1 lead. In the 52nd minute, Southerland would complete her hat trick by scoring off a ball won from a goal kick that she drilled past the keeper for the 6-1 score. The Lady Panthers would get one more goal back in the closing minutes of the game making the final score 6-2. The Lady Black Knight defense played well once again holding Church Hill to only a handful of shots all night. The Lady Black Knights are now 4-0 on the season and will be back in action again on the road at Unicoi County Monday evening at 6:00pm